We are nearing the end of the process of re-mastering every Laserburn vehicle in 15mm scale into either high grade resin or new white metal molding.   It has been a lot of work as you can imagine but its also been a lot of fun too.  Thanks to everyone who has already gotten themselves the smaller vehicles such as the Flit Car, the Hover Van or the awesome Law Officer Air Raft from the Laserburn page at 15mm.co.uk.

Above you can see a picture of the newly re-mastered into grey tone resin V008T Glaive APC with an Imperial Trooper for scale.  We have kept the details of each vehicle as faithful as possible to the beloved originals with only small changes here and there to accommodate the new production medium.  However with the tracked variant of the Glaive it was necessary to build new tracks from scratch due to deterioration of the original masters.

Here is a list of the codes we still have to release and all of these will be put out inside this season and before the summer with each getting the normal announcement and imagery when its time:

While almost all of this list will be released in resin some do have white metal components and these have all be re-master and molded up freshly.

I know there are many hundreds of Laserburn fans who are keen to get their hands on these new versions of classic 80's sci-fi and I can say that the pricing on the new versions will be lower and in some cases much lower than the original all metal versions.  There are a number of factors involved in this but mainly its down to the weight of the original metals.  Codes such as V011 Scorpion Air Lander were very heavy indeed and required special conditions to cast as solid objects. 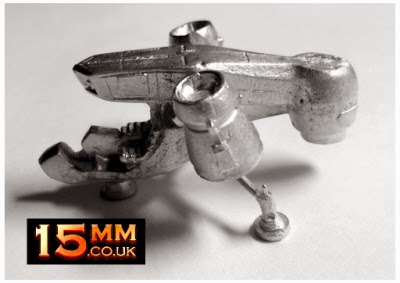 So what is first up...its the V105 Sabre Jet Copter and its looking awesome!  Keep an eye on the blog once the Space Raptor madness is done with!