This blog post is a round up of the original pages of the Lound Ninja Games Kickstarter which ended on the 9th of November 2012.  15mm.co.uk supplies these miniatures and models and we thought it would be nice for those who came to the Space Raptors later on to be able to read what was said back at the start.  Visit LNG on its page on our website or their blog directly.  See them in action on this blog here.

Resembling the Dromaeosaurs of the Earth's prehistoric past, the Chuhuac are a species of warm-blooded saurian aliens hailing from the world of Sherawl. The name Chuhuac is a simplification   in the common language of the greater galactic community, the actual tonal and vocal pronunciation being a distinctly saurian sound with avian overtones. Properly pronounced, the species name sound something like, "CHOO-Hwaaaaa-k-k-k". The word starts with a low, guttural chuffing sound that trails into a low keyed whistle and ends with a three beat clucking/clicking sound in the back of the throat.

The exact origins of the Chuhuac are unknown, even to the species themselves. According to their historians, they were "nested" upon their home world of Sherawl by a great Star Mother who laid her celestial eggs on the world where she would watch over them until they hatched and then disappear into the stars. This myth and archaeological evidence would indicate that the species is not native to the planet but rather was seeded or came to the world of their own volition eons ago.

Examinations of the archaeological evidence indicates that at the time of the first signs of culture on the planet, the technology level of the world was actually much higher than it currently is but, declined suddenly and then had to work its way back to its current level. Culture also seems to have dwindled and then rekindled itself, suggesting that perhaps the Chuhuac did indeed come from some other place but for whatever reason were not able to maintain a society.

The history of this saurian species mirrors that of most intelligent species with the notable exception that occasional bursts in the species' development occurred as bits and pieces of ancient technologies were recovered from the various ruins of their ancestors. Discovery, war, famine, enlightenment and near apocalypse are recurring themes throughout the thousands of years of continuous growth from their clouded past. Dating technology indicates that Chuhuac habitation on Sherawl may date back tens of thousands of years farther than their recorded history. Unfortunately none of the artifacts recovered from the original "nesting" sights has revealed any definitive data on where they came from or why they came to the planet or even if it was their intended destination.

The modern Chuhuac are an advanced culture with high level of technology that includes a mastery of nanotechnology, artificial intelligence, intergalactic travel and a host of other sophisticated sciences. A part of the greater galactic community, the Chuhuac possess energy weapons as well as force field technologies and have vehicles that use gravitic drives both in military and civilian applications. Though they do trade with other species, these saurians are mostly insular and distrustful of outsiders. This has led to more than one conflict with neighboring systems including a nearby collection of systems populated by various saurian species known to the Chuhuac as "The Prey Worlds", a name that is accurately indicates the relationship between the Sherawl and these other worlds.

Loud Ninja Games is a new miniatures company that I decided to start to bring out some amazing ideas that have been trapped in the recesses of my imagination for years. To kick off the company I chose to run with one of my oldest and most dear concepts - science fiction Velociraptor style aliens.

These "Space Raptors" have been a dream of mine for over a decade now. I had doodled them, thought about them, planned them, even used them in role-playing games and so it only seemed natural that, when I decided to start my own miniatures line, they be the flagship release. When it comes down to it, how can you not love the idea of one of prehistory's most efficient and thrilling predators, tricked out with armor, guns, gear and zooming through the cosmos. What is more evocative than the image of armored raptor warriors darting across the battlefield, raining down a hail of energy bolts from their advanced weapons, eventually closing with their enemies to put them under a sickle claw. 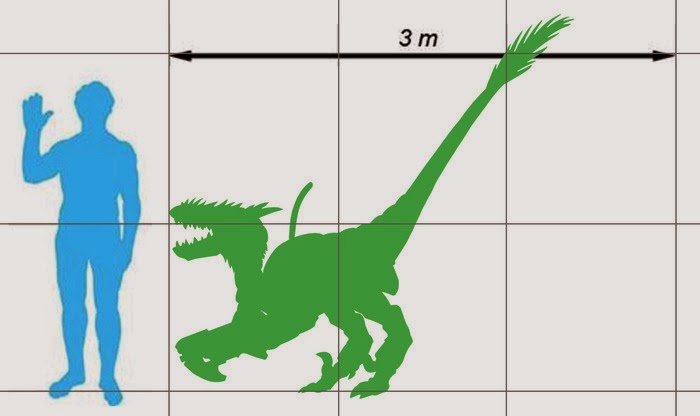 Called the Chuhuac (CHOO-hwok), the initial project release includes to packs, each made up of six unique poses of 15mm scale metal miniatures - 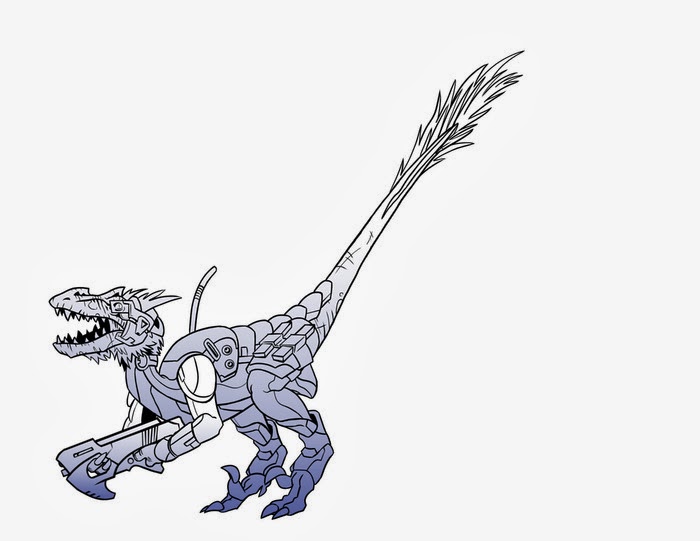 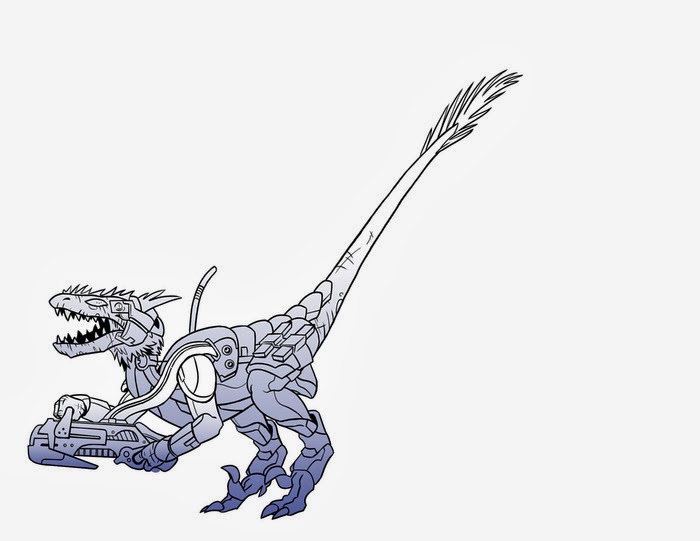 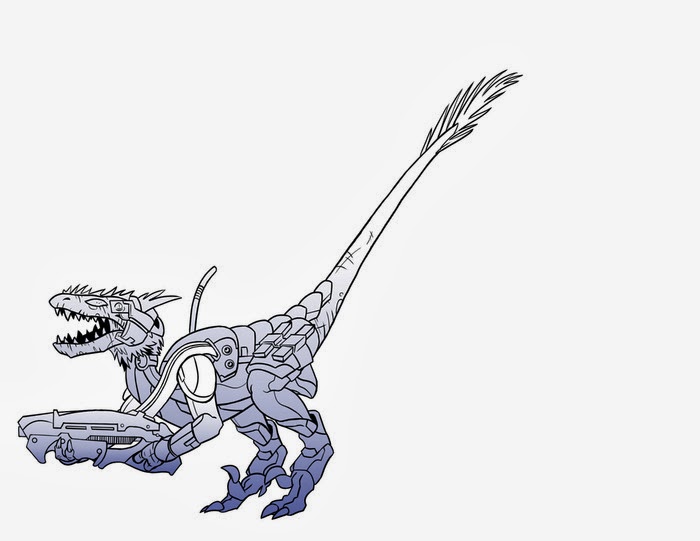 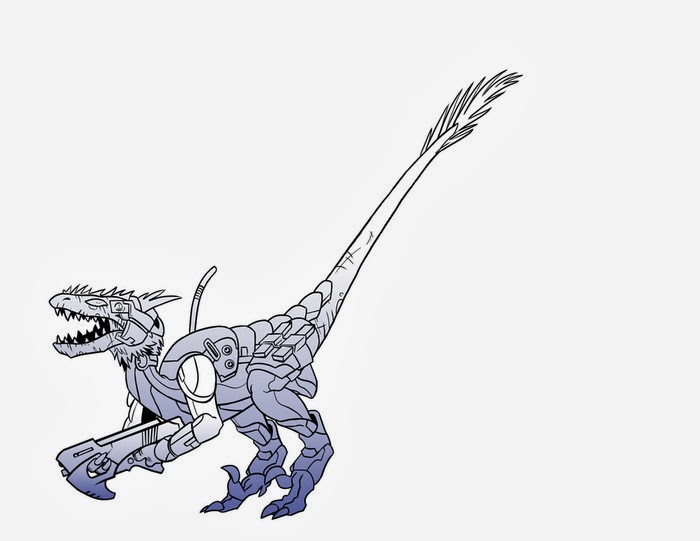 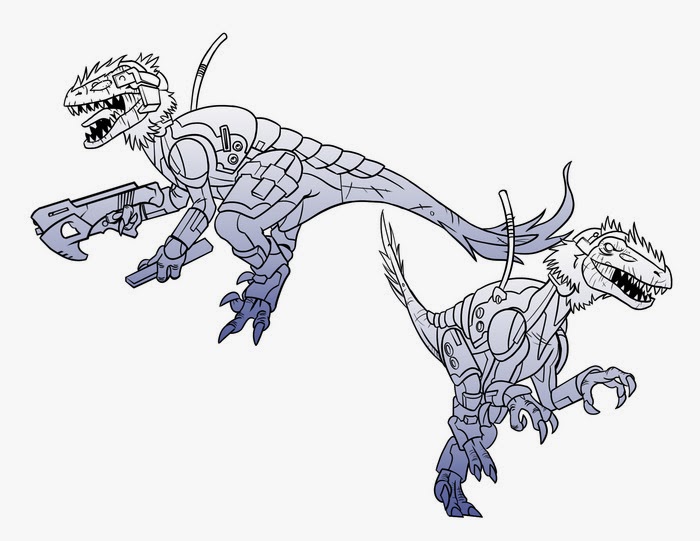 With the infantry taken care of the Space Raptors expanded through strech goals to include Battlesuits, a vehicle and Grav Bikes plus 28mm Space Raptors.

With all of the packs and codes laid out there were also some special bundle offers with a saving of 5% to 10% off normal prices.  These have been transposed to 15mm.co.uk on the whole and are as below:
RAP007P Chuhuac Battlesuit Section (6)