“A large Man-like, almost Troll-like, figure, at least fourteen foot high, very sturdy, with a tall head, and hardly any neck. Whether it was clad in stuff like green and grey bark, or whether that was its hide, was difficult to say. The lower part of the long face was covered with a sweeping grey beard, bushy, almost twiggy at the roots, thin and mossy at the ends.” - The Ent 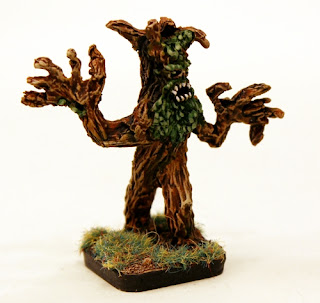 We have re-molded and now make an offer on a classic 15mm scale monster in the Tabletop Games range of miniatures.  Ent is the old english word for what we would call in wargaming a tree-man but more than that an ancient being possessed of passion and a soul.  Great for your skimish and battle games and until the end of the month its 25% off its regular price.  Below is a scale shot next to a 15mm tall Human Bard from the TTF range.  Go HERE 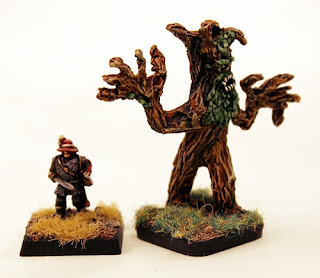 This code contains a one piece white metal 15mm scale creature.  The miniature is roughly 40mm tall and works well as an Ent or Treeman for your 15mm skirmish or battle level wargames.  Supplied unpainted and without a base.  Other miniature is 15mm tall and shown for scale only and not supplied.  Purchase one pack or three packs with a saving.  Price 4.00GBP  Go HERE.