With a groaning of effort the mercenaries managed to push the heavy steel door shut.  Its red paint was flecked in places from bullet impacts and burned by the flame throwers used by these private soldiers in their efforts to keep out what was following them.  Malamute Executive Response had sent in a dozen of them in one grav-copter and a second dozen in another.  Of the other group there was no sign and only ten of the twelve here remained.  Two of their number had been lost, changed, by the snow made men out there on the ice.

Sergeant Campbell ordered full weapons and kit checks and reloads and in a matter of a minute the reduced team were ready once more to proceed into the silent complex of the AH Station. They were in a large open plan entrance hall and what looked like a meeting area.  Furniture was scattered about and two bodies lay in grotesquely twisted shapes on the hard floor.  The sergeant signalled two of their number to take a look at the bodies while the rest of them advanced with their M104 rifles ready.  The flame throwers were stowed away in favour of combat shotguns due to the blaze risk inside the station.

“Collins what happened to those poor bastards?”

The bodies had been mauled by wild animals with great bloody tears in their flesh and clothing.  But what was really odd was that they also had hundreds of fine green needles stuck in their skins around the wounds.  Something was really wrong with AH Station.  What were the corporate staff here doing?

“Sergeant.  I have no idea.  They are dead aright, have been for a while in fact. But these green needles...almost like from a tree or something.”

After what had happened outside the Malamute mercenaries were taking no chances.  They scanned the large area again and this time noticed two dozen decorated trees that surely had not been there before.  Loaded with baubles and bedecked with garlands it was strange since it was late autumn.  They were about to return their attention to the corpses when the trees shook and seemed to start to move towards them.  What happened next resulted in a hail of gunfire.  The tree nearest to Trooper Baines seemed to split apart up its trunk and a mouth emerged.  A mouth with a red tongue and rows of razor sharp white teeth!

“Aw Hell!  This is turning into a real peach of a day.  Fire!  Pick your targets and get pruning!” 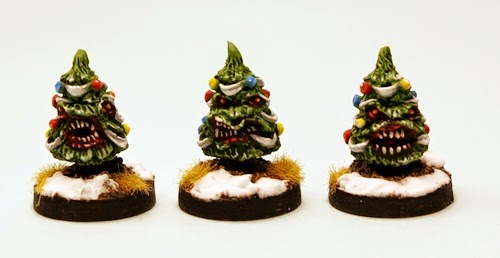 Its the start of a month plus of festive season fun for 15mm.co.uk and as the little story above tells you its going to be a little mad too just like last year.  Our Deals and Offers page is going to play once more host to a seasonal range of miniatures in 15mm scale that will also be around during this one period of the year.  We begin today and we end in early January 2015.  You have a month or so to get these miniatures until next winter.  We will also have other specials and releases but it kicks off here.  So if you like the spirit of Christmas and of Wargaming and you have fun in your heart then read on!

Last year we introduced our seasonal range of festive miniatures with their first code SN01 Evil Snowmen and they went down a treat and we promised that we would expand the range by another code every time the cold came back.  So we have.  Back on sale for a month are the Evil Snowmen in a pack and in a value pack too but now we present the brand new follow up....SN02 Killer Xmas Trees!  That's right.  The madness continues in our Christmas theme.

SN02 Killer Xmas Trees - 5 Magic Creatures  5.00GBP
This code contains five 15mm scale white metal miniatures in three poses.  From one side these approx 22mm tall trees are nice and friendly with sparkly baubles and paper bands adorning them but turn them around and horror they are all teeth and doom!  Unique and fun with a lot of uses from a festive themed army to a post apocalypse campaign and more these monsters will get your opponent's attention for sure.  They go great with our Evil Snowmen. Supplied Unpainted and without Bases. HERE. 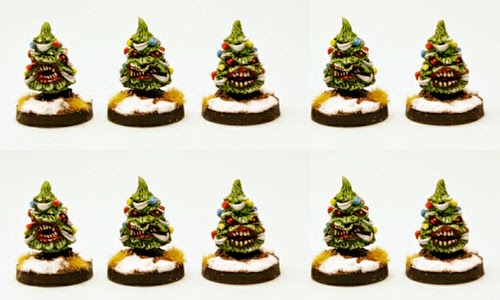 SN02VB Killer Xmas Tree Forest - 10 Magic Creatures  9.00GBP
This code contains ten 15mm scale white metal miniatures in three poses.  From one side these approx 22mm tall trees are nice and friendly with sparkly baubles and paper bands adorning them but turn them around and horror they are all teeth and doom! They go great with our Evil Snowmen.   Supplied Unpainted and without Bases.  This bumper value pack saves you 10% off list price! HERE.

SN01 Evil Snowmen - 5 Magic Creatures  2.50GBP
This code contains five different 15mm scale white metal miniatures.  Our not so friendly snowmen suitable for any festive themed scenario or army.  Each of them stands about 10mm tall and poses are hat with hatchet, top hat and candy cane, wool hat and rifle, saucepan and scarf, severed head and knife. Supplied Unpainted and without Bases. HERE. 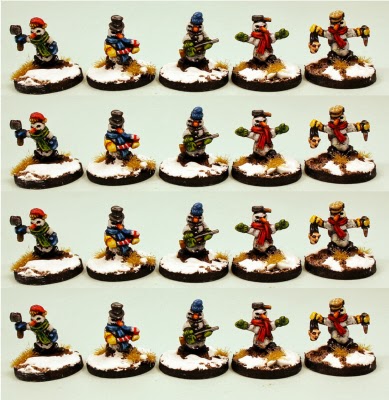 SN01VB Evil Snowmen Horde - 20 Magic Creatures  9.00GBP
This code contains twenty 15mm scale white metal miniatures taken from five different poses.  Our not so friendly snowmen suitable for any festive themed scenario or army.  Each of them stands about 10mm tall and poses are hat with hatchet, top hat and candy cane, wool hat and rifle, saucepan and scarf, severed head and knife. Supplied Unpainted and without Bases.  This bumper value pack saves you 10% off list price! HERE. 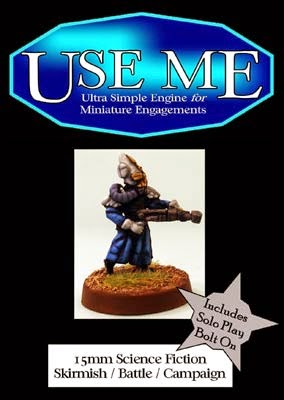 Cold Thing and Branch Face- USEME Scenarios
Last year we advertised a free USEME scenario that was coming up to go with our festive range. Sadly the master file for this scenario was lost and therefore it was never published.  This year though 15mm.co.uk will be putting up two scenarios for free.  The first is a re-write of the original Cold Thing and the second is a new one called Branch Face.  Generic and suitable for UM001 15mm Science Fiction or UM004 Modern Warfare they will give you a weekend of fun for sure!  Details to come.