I want to thank everyone for the fantastically positive response to the re-mastering and re-release of the mighty HOT37 Destroyer of Hope grand dragon this month. We now complete the classic resin project which saw a half dozen 15mm HOT and Tabletop range monsters taken out of white metal production and entered into resin production with the HOT7 Giant of which thousands have seen gaming tables worldwide. It is online now with 15% off until the end of the month. Go HERE or read on. 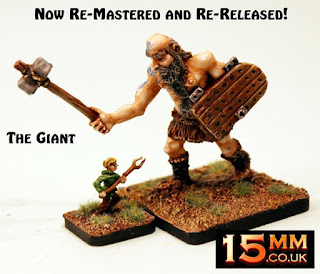 One of the earliest codes in the HOT 15mm Fantasy range the Giant serves well in armies of Humans, Dwarves, Orcs and many more. Here are the details. 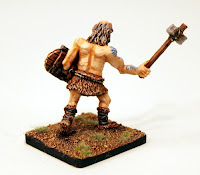 HOT7 Giant
This pack contains one grey tone resin 15mm monster supplied in one piece. This classic giant stands 50mm tall to the top of its head and carries a stone topped club as well as a torn off re-enforced wooden door as a shield. Suitable for use with many different armies it suits many different fantasy races. Supplied unpainted and unassembled and shown on a 40mm by 60mm base which is not included. Choose from one pack or three packs saving 10% off list price. 6.00GBP

Here are some other pictures of the Giant shown with other miniatures and items from our ranges to give you a sense of its scale and use in 15mm wargaming. Go HERE.

We have many other monsters and creatures in the HOT 15mm Fantasy Range which you can see on a specialised site search by clicking HERE. Thank you for your support in this project and for the kind words sent our way.