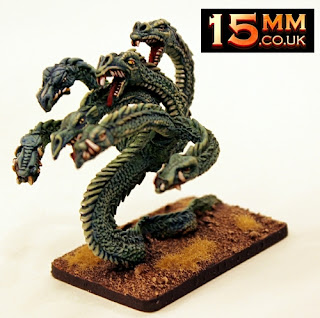 We want to wish you all a very Merry Christmas and a Happy New Year. While the weather outside may well be frightful we have something that will warm the inner wargamer in you. Live now and into January 2016 we have a new page on our website called 'Free Shipping Products' and everything you find on that page is shipped for FREE anywhere in the world. Selected codes which if you buy one its shipped free anywhere, if you buy three or five or ten or more its shipped free anywhere. If you combine items on the page then they will all be shipped free anywhere. However if you add any item not on that page you will pay our standard shipping as usual. This is a great deal and if it proves popular we may well keep it going in the new year. Go HERE.

So what do we have for you? The big four! That is the big four 15mm scale white metal fantasy monsters in our HOT 15mm Fantasy Range. These are: 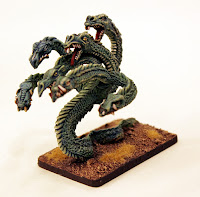 HOT35 The Hydra
Seven headed serpentine behemoth that terrorised Lerna in the ancient days of Greek Heroes. Evil to the core! This pack contains one 15mm scale monster kit cast in high quality white metal. Assembled from three pieces and standing about 65mm tall the Hydra is a monster to be proud of. One of our most popular codes for near two decades it has now been re-mastered and re-molded. 10.00GBP each or buy three and save 10%. Go HERE. 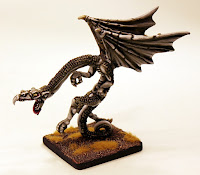 HOT100 The Ghoul Dragon
"Between the realms of life and of death there are places in which the carrion lords of the damned reside. Of these Attor the Ghoul Dragon is most deadly...."Our one hundredth code in the HOT Range of 15mm scale Fantasy Miniatures we present The Ghoul Dragon. This gaunt and fearsome creature is made of white metal and supplied in three pieces. Perfect for use in any generic or specific fantasy setting as an Undead monster or a vicious foe as part of an army aligned to evil. But of course with a different paint scheme it could also be a Dark Elvish creature or anything else you choose. Stands about 65mm tall. 10.00GBP each or buy three and save 10%. Go HERE. 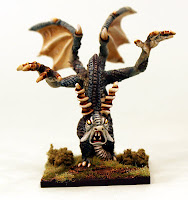 HOT94 The Jabberwock
Beware the Jabberwock, my son! The jaws that bite, the claws that catch! Inspired by Lewis Carroll's classic and well loved poem from 1872 this white metal 15mm scale monster is supplied in six pieces which require assembly. Perfect for use in any generic or specific fantasy setting as a forest dwelling monster or as part of an army aligned to evil or chaos. Stands about 55mm tall. Terrify your foes! 10.00GBP each or buy three and save 10%. Go HERE. 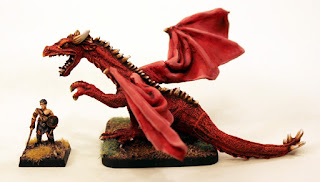 P11 Old English Dragon
A tremendous white metal monster equally at home in 28mm or 15mm scale and Alternative Armies has now put it back in to production. Its on 15mm.co.uk as a Titanic Monster or Grand Dragon at our request as it is ideal for a grand dragon in 15mm scale! A classic 1980's monster is brilliant even by today's standards. Full of detail and expression it is a creature of rage and power. It is composed of five white metal parts these being the body, a foot, the tail and two wings which are straight forward to assemble. Once assembled the Dragons stands about 55m tall, 100mm or so across and about 110mm long including the tail. Suitable for any fantasy campaign and rules system and it belongs with you if you collect Dragons as well. 20.00GBP each or buy three and save 10%. Go HERE. 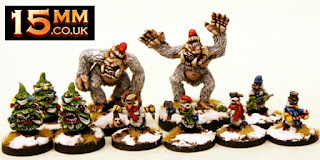 We hope you enjoy this new free postage products promotion (so many 'p' to say out loud eh!) and remember the Seasonal Festive Range is online now only until 11th January when they will be put away until next winter. Three different awesome and unique packs of miniature and a sample pack too. Evil Snowmen, Killer Xmas Trees and the new Abominable Snow Monsters that come with a separate sprue of Christmas Hats! Go HERE.

As we say here in Scotland have yourselves a Happy Hogmanay and a Grand New Year!