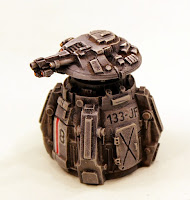 HOF27 Maginot Defence Turret
This brand new MkII pack contains the resin pieces to assemble one 15mm scale Maginot Defence Turret. The Maginot is a stationary structure that acts as a strong point for your forces in play. Designed as a feature of the Human Colonial Army template in Alien Squad Leader 2.0 it is equally at home in any near future or such game system. Parts are: Turret Main Body, Turret Ring and Top (rotatable in mount when assembled). Easy to assemble from two parts. Approx 45mm tall and 30mm across when assembled. Its great value at 5.00GBP.  Go HERE. 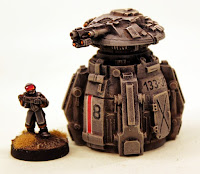 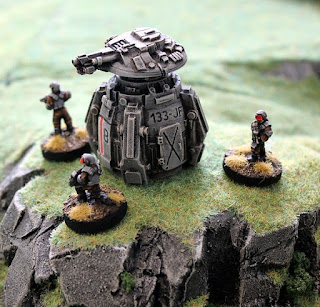 The Maginot is part of Security Force Alpha (SFA) in the HOF Range. From battles to peace keeping or law enforcement roles it suits them all. Choose from a pack or three packs (saving 10% automatically on the price) supplied unpainted and without bases. Mono image shows parts. Image with SFA Trooper is for scale only and miniature not supplied. 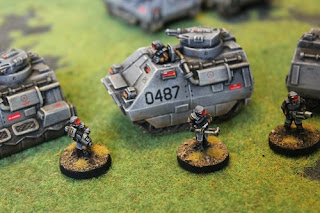 The SFA range contains a huge variety of poses of 15mm white metal miniatures and vehicles allowing a wargamer to assemble a cohesive force for their campaigns. A whole integrated range within HOF which contains vehicles, tower, infantry, command, scouts, elites, female and more! Go HERE.