As masters of biotech and biomech enhancement, the Chuhuac has long utilized lesser creatures, augmented by technologies, to supplement their military. Known as combat cyberforms, these living drones are not controlled so much as guided. Trained and skill wired for specific tasks, they are much more autonomous than many robotic drones and so require less direct handling and programming.

In the skies over the battlefield enemies are constantly under the scrutiny of many small cyberform flyers as well as the soaring specter of the "Kreeshac" heavy combat cyberform. with a wing span in excess of eight feet, this flying reptile is loaded with advanced long range sensors, target acquisition and communications equipment. Where the smaller, platoon-level cyberform flyers are tasked with localized, smaller unit support, they are networked through either their handlers or the Kreeshac cyberforms. Deploying a Kreeshac over the battlefield allows a greater network and longer reach for battlefield presence, essentially establishing an atmospheric communications satellite. Long range assets can even target off the information provided by the prying eyes of the heavy combat cyberform.

Now Released on 15mm.co.uk the latest addition to the excellent space raptor range from Loud Ninja Games.  Go HERE to see RAP12 Chuhuac Heavy Combat Cyberform.  This unique flyer is a great addition to your forces and if you have some of the Chuhuac in your collection it goes really well with the smaller combat form in RAP003.  Here is a scale shot alongside a space raptor trooper: 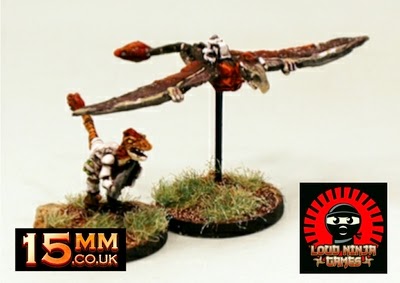 You can find the whole Chuhuac Space Raptor range HERE.

Additionally due to customer feedback and with permission from the guys at LNG we have added an option to the RAP003 Chuhuac Command pack allowing the purchase of a pack of six little drones.  This means you can get a force of the small Combat Cyberform as below.  A dropdown option in the menu from HERE will get you this new sub-pack. 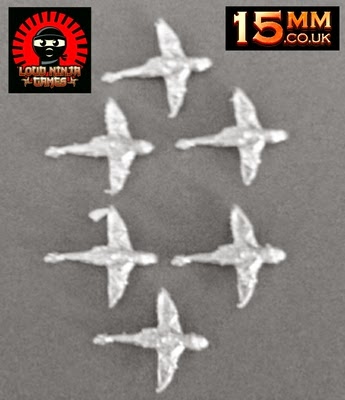